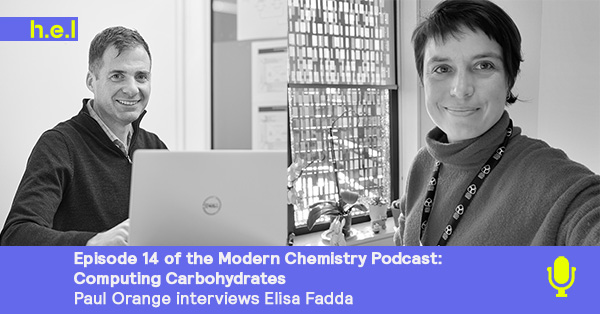 Episode 14 of the Modern Chemistry podcast is a deep discussion with Elisa Fadda about all things glycosylation, particularly how glycosylation of the SARS-CoV-2 spike protein plays an essential role in the infectivity of the COVID-19 causing virus. Since 2014, Elisa has been a lecturer in the Department of Chemistry at Maynooth University.

You can also listen to this podcast by clicking on this link: https://0-series-preview.simplecast.com/episodes/computing-carbohydrates

Our theme music is “Wholesome” by Kevin MacLeod
Music from Film Music
License: CC BY
Connect with me (Paul) on LinkedIn.

Elisa Fadda obtained her PhD in 2004 from the Department of Chemistry at the Université de Montréal under Professor Dennis R. Salahub. From May 2004 to May 2008, she worked as a post-doctoral fellow in Dr Régis Pomès’ group in Molecular Structure and Function at the Hospital for Sick Children (SickKids) Research Institute in Toronto. From June 2008 until May 2013, Elisa worked as a research associate and honorary research lecturer in Prof Robert J. Woods’ group in the School of Chemistry at NUI Galway. In 2013 she was awarded a Post-Graduate Certificate in Teaching and Learning in Higher Education from the Centre for Learning and Teaching (CELT) at NUI Galway. In August 2013, Elisa became an Assistant Lecturer in the Department of Chemistry at Maynooth University, taking on a Lecturer position in 2014.

The publication we refer to early in the discussion can be found here. For a complete list of Elisa’s publications, visit her group website. Alternatively, if you want to contact Elisa, you can find her on LinkedIn and Twitter.