The PolyBLOCK 4 is a versatile compact parallel reactor block with in-built heating and stirring capabilities. Cooling can be achieved by an external circulator. This piece of equipment is used in chemical synthesis within process development and R&D. The four independently controlled reaction zones are beneficial for Design of Experiment (DoE) studies and are also found in other products such as the BioXplorer and ChemSCAN ranges. Depending on the intended use, the reactor vessel will typically be glass or metal. Glass is often used for general synthesis and laboratory work, while metal – typically stainless-steel (SS316) or Hastelloy (HC276) are used for high-pressure applications. Reactor vessels can range from as low as a 1 mL HPLC vial to 500 mL reactors, with aluminum adaptors available to support the full range of reactor sizes.

This study demonstrates the maximum heating capabilities of the PolyBLOCK 4 by testing different solvents, reactors, and temperature control methods.

Thereby providing a valuable guide to selecting the right combination of these factors when designing an experiment.

Silicone oil (Huber P20-275-50) was the main solvent used for these tests, due its wide operating range. In all cases, stirring was provided via magnetically coupled agitation provided by the PolyBLOCK in-built magnetic stirrer at 400 rpm. Six-blade PTFE Rushton impellers were used in both the glass and metal reactors. In addition, a Huber Unistat 430 was attached to the PolyBLOCK to provide active cooling. The Unistat 430 is larger than the recommended circulator for a PolyBLOCK. However, it has similar cooling and heating capacities to other smaller models, and thus allows for a performance comparison.

In contrast, Constant Reactor Temperature Control (Figure 3) heats the reactor contents to a specified temperature as quickly as possible. Both heating modes were investigated.

In a previous heating characterization, the PolyBLOCK achieved 7 °C/min when heating to 120 °C/min. These first characterizations evaluated ramping to temperature by 5 °C/min, 6 °C/min and 7 °C/min to 160 °C, 180 °C and 200 °C. The circulator oil temperature was set at 30 °C, 50 °C and 70 °C, respectively (Table 2). This allowed for a maximum temperature difference of 130 °C between the circulator and solvent inside the reactors (Graph 1).

Reactors 1 and 2 took 35 minutes to get to temperature while R3 and R4 only took 25 minutes. No reactor displayed any significant overshoot. The heating profiles between reactors differed from each other between 170 °C and the final setpoint temperature. These results show the impact of factors such as the material of the reactor, and solvent volume that need to be considered for heating applications. Other factors such as stirrer speed and solvent can also affect the results obtained.

This study also evaluated the impact of simultaneously heating each reactor zone to five different temperature setpoints, ranging from 40 °C to 160 °C (Table 3). During this study, the connected Huber Unistat 430 circulator was set at a constant circulator temperature of 30 °C. These results can be seen in Graph 2, showing that the individual set temperatures of each zone do not have an affect on the neighboring reactors.

In the second step of this test, the results show that shorter temperature changes will occur much faster – as may be anticipated. An example is seen in Graph 3 where heating from 80 °C to 120 °C (pink line) occurred within less than 10 minutes of the step starting. In comparison, the green line shows heating from 40 °C to 160 °C required almost 20 minutes to reach the set temperature. A similar effect is seen when cooling over smaller temperature ranges. 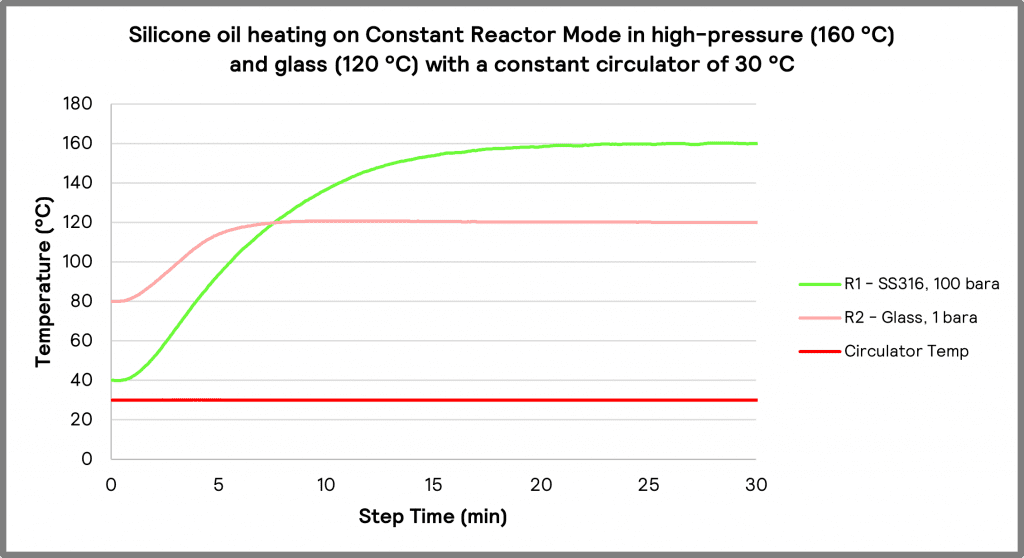 The PolyBLOCK 4 achieved a maximum ramping rate of 7 °C/min (Graph 1) when heating from 80 °C to 200 °C, with a constant circulator temperature of 70 °C. This is an overall temperature difference of 130 °C between the internal temperature of the reactor and the circulator.

Factors such as the material of the reactor or solvent/solvent volume could impact on the rate of heating, meaning the over-all ramping rate for R1 and R2 was 4 °C/min.

We want to thank the contribution of Dr. Paddy Delaney, for lending us a Huber Unistat 430 for these characterizations and other applications.