Success may feel hard to find when synthetic and organic chemists must prepare for most lab-run reactions to fail. But are we too obsessed with tracking success outcomes, so miss key knowledge nuggets found amongst the so-called fails? That is very much the thinking of one modern chemist.

Dr. Monica Perez-Temprano champions testing failures, considering them foremost in any investigation. She delights in the unexpected, and as her team’s lead at ICIQ (Institut Català d’Investigació Química / Institute of Chemical Research of Catalonia), Tarragona, Spain, she inspires her people always to keep an open mind. “I especially want to be told about the reactions that don’t work. If you only achieve expected results, you have learned very little. It’s the failed reactions that provide so much more information.”

The team works to understand relevant organometallic processes within transition metal catalysis, specially C-H functionalizations, using first row metals. They are pursuing critical mechanistic information on well-known reactivity alongside what they have monikered their U3D goal to Understand, Discover, Design, and Develop novel and more efficient transition metal-catalyzed reactions. The initial concept is to trap key reactive reaction intermediates and use them as knowledge building blocks (KBBs) for streamlining the design and development of chemical transformations. 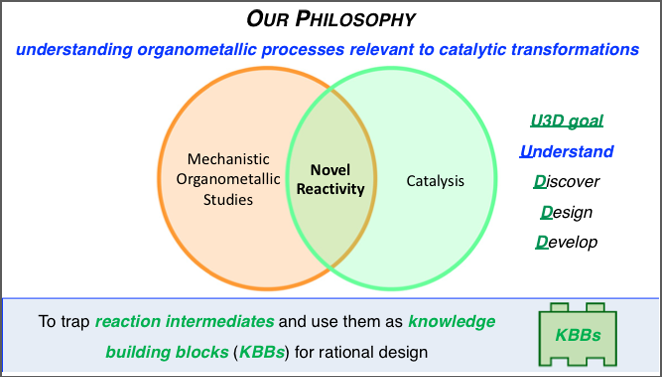 The realities for catalysis

As proof of concept, the team has targeted benchmark reactions to unpack findings and carry out further exploration. By exploiting the gathered fundamental knowledge on cobalt-catalyzed C-H functionalization reactions, they have shortened reaction times, reduced catalyst loading, or uncovered beneficial effects by using perfluorinated alcohol as an additive in these processes. Other exploration unearthed that certain intermediates used as reaction pre-catalysts had the potential for localized transformation.

Dr. Perez-Temprano’s work is aligned with the long-term industry’s desire to find a robust alternative to catalysts based on precious metals, such as palladium. With the metal’s broad use within pollution-control devices, world shortages have driven its value to record levels: rising more than sixfold since 2016, the metal is now worth more than gold. However, palladium’s versatility and applicability as a catalyst set it apart from more sustainable and available alternatives, so here lies the challenge of finding its replacement.
Over the past decades, the chemical community has uncovered that catalysts based on cobalt, nickel, or manganese show promise in C-C and C-heteroatom bond-forming reactions. For Dr. Pérez-Temprano, cobalt has particular “chameleon-like” properties: depending on the metal center’s environment, it can behave as Palladium (Pd) or Rhodium, or like alternative cost-effective metals, as Iron.

Observing cobalt’s current synthetic limitations has shown that; in ligand-assisted C-H functionalization processes, only three transformations involve the use of nucleophile partners. This is an unexpected result, considering that nucleophiles are among the most prevalent partners in Pd-cross coupling reactions. In their more recent work, the team has unraveled how high-valent cobalt(IV) intermediates in carbon-sulfur bond-forming reactions act in an intermediate manner when using nucleophilic partners. It is hoped that such findings will initiate other groups to further explore high-valency cobalt chemistry for synthetic purposes as an alternative to noble metals.

On the hunt of the hidden

Currently, few people work in the field of trying to make unsuccessful reactions work. Something worth reconsidering when mindful of the large amounts of relevant test data available. Access to the ‘fails’ makes it possible for Dr. Perez-Temprano to go way farther from a mechanistic point of view. This allows them to modify and define solvents or starting materials containing different directing groups, and from there, make them react with a range of varying coupling partners.

Sometimes discovery is carried out in parallel, completing mechanistic studies alongside catalysis and crossing results looking for sense. Results show that what may work from a mechanistic point of view will not work in catalysis and vice versa. So given the groups’ knowledge in mechanistic investigation, they used their library of reactive intermediates (KBBs) in varying reaction conditions, thus developing powerful tools to decode chemical transformations relevant for catalysis. Broad experience among the team allows them to consider every outcome, including what at first may look insignificant.

Working in parallel, mechanistic studies forecast outcomes, and the catalysis makes it possible to search for the same signals and monitor the kinetic order with the reaction step. The team knows they do not see everything all of the time, but experience tells them that just because something cannot be seen does not mean it is not there.

One of the team’s long-term goals is to understand additives in this context fully. It is a problem area that Dr. Perez-Temprano feels science does not currently pay enough attention to. “When you remove something that doesn’t appear in the catalytic cycle, and the reaction does not work, that should make you think. If you make the wrong interpretation here, you completely mislead your own conclusion and propose something happened in a way it did not.”

For Dr. Perez-Temprano, the chemical community right now is too eager to publish papers that only reveal success outcomes. The failures truly tell us something, revealing methodology limitations and why a mechanism does not work. Unsuccessful results should be the start of the investigation rather than be buried as a footnote.