Home > Why is temperature so important to achieve optimum battery performance?
Previous

Why is temperature so important to achieve optimum battery performance?

Battery-powered devices are everywhere within society, and this is only set to increase, especially as the electric vehicle market grows. This results in the demand for higher-powered, longer-lasting, better-performing batteries. With this comes the need for tightened safety regulations to ensure the safety of these ever-improving batteries is not compromised. This is where manufacturers have to take into account the importance of temperature when it comes to achieving the best possible performance and properties for their batteries. There are many factors to be considered regarding temperature and batteries, and we discuss a few of these below. 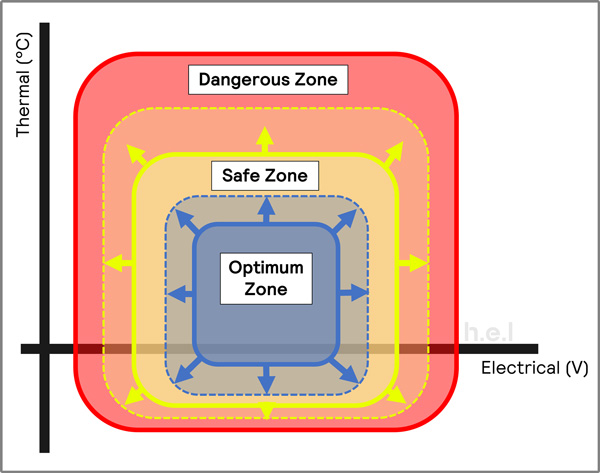 When exposed to prolonged low temperatures, the electrolyte within many batteries will become more viscous, resulting in a continual decrease in performance. Eventually, the battery will cease to work as the electrolyte freezes solid. This results in a loss of functionality which can be irreversible.

High temperatures can also cause issues, often more dangerous for batteries. Exposure to high temperatures only has to be short for it to reduce the lifespan of rechargeable batteries. Battery fires can also occur due to thermal runaway as the electrodes and cathodes can decompose, and the separator can melt when the critical point is reached.

Batteries will create and absorb heat as they work, which can change depending on the environmental conditions, the rate of charge and discharge, the state of charge, and the age of the battery, so thermal management needs to be considered when designing batteries. 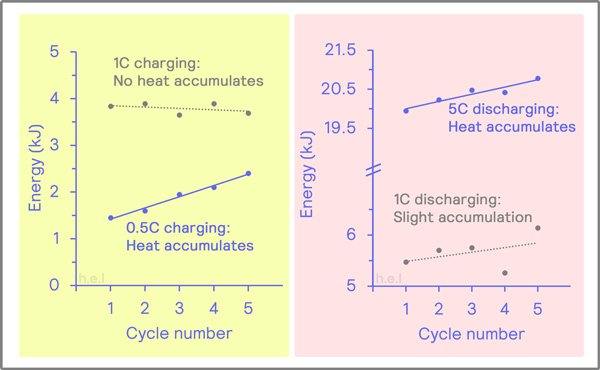 Failure to correctly manage the thermal behavior of battery products can result in harm to the manufacturing company or product’s reputation and dissatisfied customers. For this reason, many battery developers are very cautious and will ensure battery temperatures remain within tight set limits to avoid the embarrassment that Samsung had with their S8 Note smartphone in 2017 and that General Motors had with their Chevrolet Bolt electric vehicle in 2021.

Due to this cautiousness, manufacturers often recommend a very narrow temperature range for optimum conditions for the use of a battery-powered product or constrain the battery’s performance to limit heat generation. This can be seen in scooters that often have a slow charge rate or low acceleration to top speed to reduce the heat produced and minimize risk. Some thermal management systems will also take steps to actively cool batteries whilst in use.

It’s vital to know the thermal behavior and be able to characterize not only the battery pack but also the individual battery cells within them. This is because the heat generated by a singular battery cell can be rapidly dispersed into the environment, so there shouldn’t be any significant temperature increase. However, when you take that battery cell and assemble it into a module or battery pack, it becomes surrounded by other similar cells, which also generate heat, meaning less energy can escape the system, resulting in a significant temperature rise. 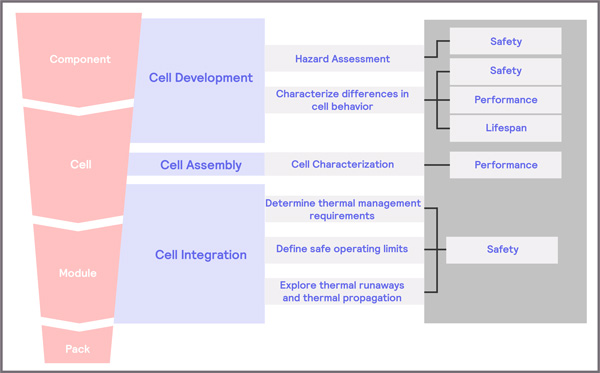 Understanding the thermal behavior of your batteries helps define and enhance the boundaries of safe and optimum operation; this can be made simpler with reaction calorimeters. You can get adiabatic, isothermal, and isoperibolic calorimeters that enable you to determine the safe operating limits for your batteries. While adiabatic calorimeters such as the allow destructive testing to see how batteries perform in extreme conditions, isothermal and isoperibolic testing calorimeters such as the iso-BTC and iso-BTC+ are non-destructive and allow the thermal characterization of batteries.

The demand for more powerful, longer-lasting batteries is proliferating as the world becomes more reliant on batteries. However, this demand needs to be met with stringent testing to ensure all manufactured batteries are safe and fit for purpose. This can only be done with the right equipment and testing, so the key zones (optimum zones, safe zones, and dangerous zones) of batteries can be determined for different applications and environments. Having a poor understanding of the effect of temperature on batteries can lead to battery overheating, reduced performance, shortened lifespan, and in extreme cases, battery fires. Compromises cannot be made as demand grows on either safety or performance, so it is crucial for battery manufacturers to have the right testing equipment so informed decisions can be made with reliable, robust data behind them.